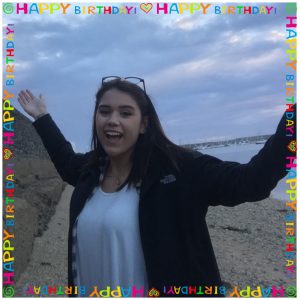 We woke bright and early. Way too bloody early really. I had had the bright idea to have timers on the bedside lamps, to make it appear as if someone’s home. Apparently, I thought it would impress the potential burglars if they believed we were awake at 5.00am ~ bing, wide awake!!

Never mind, we’re both excited so let’s start the day. Iain got up and made the tea while I posted the obligatory “Happy Birthday” pic and message to Bethany on Facebook. If you read Part 2 of the blog, you’ll know we have a lot of making up to do flying off on her birthday again!

I’m obsessively über organized, so there really wasn’t much packing left to do. Just added in last minute toiletries and hair brushes after making ourselves beautiful 😉
Another cup of tea and some toast and marmite (British delicacy!) and we were ready to go…..THREE HOURS early!
Time to start bugging Beth then! Eventually, she roused her tired little student self and came round for her cards, gifts and big birthday hugs.  That didn’t take long. I guess there’s an unwritten (& unknown to me) birthday rule that after 18 you don’t need to send people cards any more. Sad really, I always like to let people,  know that I’m remembering them on their birthdays. I suppose that’s what Facebook is for though :/

After that fun, we decided to improvise and pretend we were good parents by treating Beth to a Starbucks at the airport, so we loaded up the car and headed out. Check in was relatively smooth. Although Iains ID was “unrecognized”. I always knew he was a dodgy one! That sorted easily enough and we headed to Starbies to relax a while and shoot the breeze with the birthday girl. I do like Tampa airport, even with the reconstruction going on it is a good place to fly from. Good amenities, clean and not confusing! 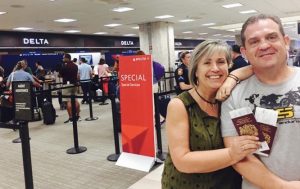 Naturally there were the necessary photo ops as we waved farewell. Iain’s complaining about that already! He just needs to grit his teeth and smile, there’s hundreds more to come! Then we were through security and on to my favourite airside stop for the traditional preboarding drinks. Nothing like a refreshing Mojito from the Columbia to get you in the vacay mood! 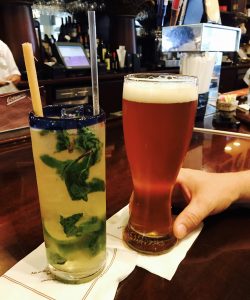 The plane was on time. Well done Delta. So it was farewell to Tampa and we were on our way to Atlanta.
This first flight was uneventful – aside from Iain spilling coffee down himself; I told you he was difficult! Also, refer back to Part 4 (Packing) to remind yourselves how limited we are on what we could take. Looks like I’ll be washing sooner than expected!

Atlanta airport was disappointing. Normally a hub of activity with plenty of restaurant and bar choices, we felt like the poor relations this time. We were at Terminal T which was sadly lacking in places to eat/grab a drink. We went with the only decent option, TGI Fridays and settled in for a late lunch. We needed to stock up knowing that we wouldn’t get in to Quito until late in the night.

As we got ready to leave Atlanta, I realized that my failure to achieve one of my goals prior to this trip was going to bite me in the butt. In January, I decided that I was going to learn Spanish ready for this trip so that I could manage a little conversation, get by and mainly to know what I was eating and how to order a drink. I did get off to a fairly good start. I can tell you what my name is and ask for a coffee. I can even ask how you are and respond accordingly when you politely return the pleasantry. However, it kind of stops there. The lessons (online) stacked up and I failed to partake 🙁
Oh well, I thought, it’ll be fine, everyone speaks English ~ typical English arrogance coming out there :/
It took me no time at all to realize my laziness was going to cause me an issue. Sitting in this little part of Atlanta airport, literally every one around me was jabbering away in Spanish. People were coming up and asking me (I can only assume) if the seat next to me was taken. They asked the time. They said a whole bunch of other stuff to which I could only respond with an ignorant shrug. I figured it was time to pull up Google Translate on my phone and at the very least learn, “I can’t speak Spanish” because I’m damn sure they’re not bothered what my name is or how I’m doing today!
Even worse was to come. The announcements came in Spanish first. Never mind that they followed up in English. By that time, all the clever pants Spanish speaking folks were already the front of the line we were being directed to!

Eventually though, we were settled on the plane again and in good time were up in the air and heading off to start our amazing adventure! We were fortunate to have one of those comedian pilots! He advised that as soon as we were loaded and they could get the 1st Officer out of the bathroom, then we would be on our way! He also said that we were lucky as the “flight path looked like it may be unusually smooth tonight”. Hmmm……our luck ran out.
I very soon learnt the Spanish for “fasten your seatbelt” and “turbulence”. Apparently this is very common when crossing the equator ~ maybe I should have researched just a tad bit more! 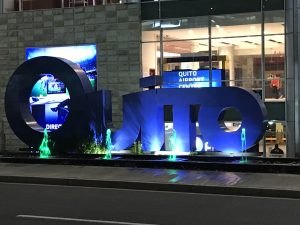 We landed in Quito smoothly and to a very comfortable 62 degrees. Although looking at the baggage and wheelchair crews I was concerned it was somewhat colder. They were all bundled up looking ready for the Arctic!
I can honestly say, I have never had such an easy entry into a foreign country. Cruised through both passport control and customs in no time and with bags in tow we made our way through to find a very nice young lady holding up a big sign; BERENICE ROWELL!
Then came my first assertive use of my new favorite phrase; “no habla español”! Well apparently she didn’t habla English either….that was entertaining! We found ourselves bundled in to a car and careering, in true South American style, through the streets and praying that we were heading to our hotel. It was all great while we were on the main highway but pretty soon that comfortable ride came to an end and we found ourselves bouncing all over the back seat (no, not like that!) as we hit cobbled streets, up hill, down hill, round tight bends, avoiding oncoming traffic and numerous roaming dogs – quite the experience!

Finally, we arrived. Fumbled through some sign language and paid the driver. He looked super pleased so we probably paid him over the top! Whatever, here we were, just on midnight and ready to settle in to our home for the next three night;  The Art Plaza Hotel. Very nice young lady from Venezuela checked us in, we managed some better communication but I’m really beginning to wish I had tried harder with learning the lingo :/ 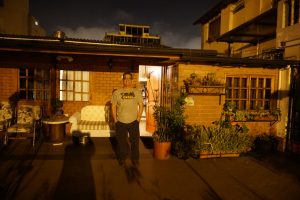 So there you go folks, I’m finishing this off, tucked up in bed in a cute little hotel in Ecuador. Iain is already snoring! It’s 1am and time for me to sign off. Looking forward to what tomorrow brings 🙂 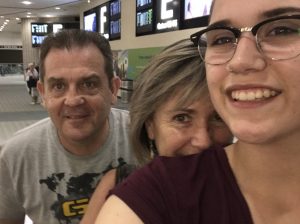